So last week’s main activity was casting my collection of objects in wax and this week I have mainly been carving Welsh stone on a rotary motor. I have been inspired by the “micro-architecture” behind the carved stone alter screens, niches and fonts which may have once inhabited Valle Crucis during it’s working life as an Abbey. Drilling into the stone and boring into it the silhouettes I have collected around the site has made me realise once again the mishmash of styles and craftsmanship here.

There’s two types of arched window, if not more, for a start but when you look much closer you realise that every subsequent repair or rebuild was a stamping of the then Abbot’s, or contractor’s, authorship and taste. Even much later ‘interventions’ by Cadw, such as the grills within the dormitory windows speak of the particular tastes and preferences of decision makers. (Clearly in this case someone has chosen to opt for the Gothic style arch rather than the rounded Romanesque, Medieval arch. Sorry, getting geeky now.) 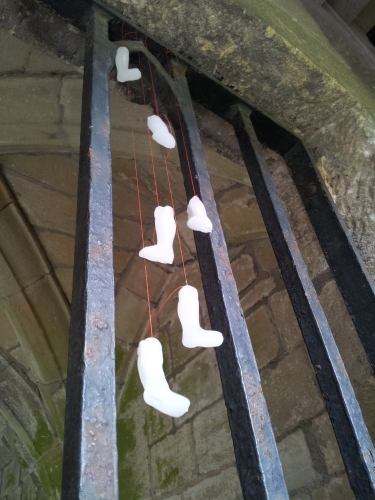 My favourite inconsistency at present is the cylindrical chimney atop the later farm house fireplaces, it looks semi-industrial. The thing that interests me most in representing the Abbey to visitors today is the interpretation of the intended life of the building, as a communal place of worship and monastic life, and whether, the story of people across its entire history should be represented too? As someone who loves to kick function to the curb I am interested to explore the appropriated uses of the building.

Anyway, those are ideas which I will be exploring in the coming weeks. 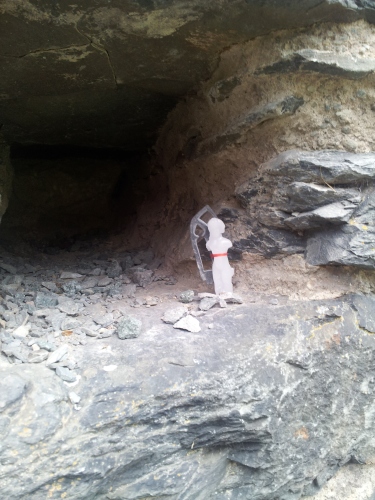 There are currently 14 tiny pieces installed across Valle Crucis and frankly I was surprised by the vastness of the building against the minute details of my pieces when I installed them. This is probably a surprise to no-one else and clearly I needed to pull myself back from the jeweller’s bench and look around me once more. This realisation made me consider space more than I have previously and since I have walked around the Abbey with fresh eyes, noticing intimate spaces which force us to inspect inconsistencies and detailing; spaces with vast uniformity which invites the viewer to search for points of interest; and ornate detailing on a large scale. I know I can work with the first two types of spaces but I am really challenging the scale of my work to take on things like the Book Cupboard or Chapter House windows. I am want to take this challenge on regardless, but again, more on that later.

Find out more about the artist