I have been casting the tiny Frozen Charlotte dolls in wax this week. All this stems from my usual interest in ‘power objects’, things like Holy relics or lucky charms, but even including the keepsakes we have in our own lives which represent another person or an idea to us.

I am bringing to the residency some recent research from further afield, from a recent trip to the Volkeskundemuseum in Brugge, Belgium, where I saw their wax votive collection and the plaster and metal moulds from which they were cast. Instantly fascinating to me because of their scale, which like so much of my collection, fit in the hand and invite close inspection. But they also interest me because of their inherent figurative quality and their strangeness: tiny white bodies, or limbs, or organs, or even teeth. 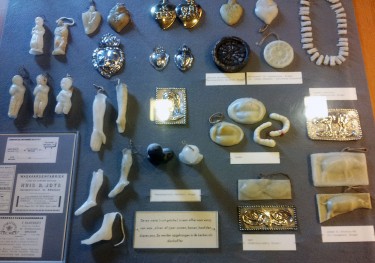 Votive offerings are placed within places of worship to gain favour or give thanks; often the wax and metal casts commemorate spiritual help with a particular issue – failing eyesight, fertility, arthritic limbs. I can only assume the Volkeskunde Museum acquired this collection in part from someone with very bad teeth from the amount of wax teeth and mouths.

A combination of thinking about the colour white and the materials that were in use in the working Abbey originally led me to wax. Faced with wanting to create copies of the objects from my collections so that I could make lots and leave at the mercy of the elements I thought I might try casting them in this lesser material to see where it might lead. In trying out materials and creating samples I ended up with a series of tiny wax figures in my hand which reminded me of something quite powerful and something I had felt excited by fairly recently. The idea that I might be leaving small sculptures around a former Abbey somehow seemed a little votive, although not in a religious sense in my case. 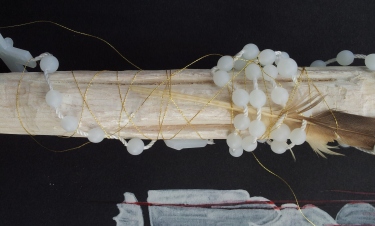 I read last year in a book called ‘Supersense’ by Bruce Hood, how the human mind constantly creates these connections and that in artists this is heightened. Within my work, these connections are key in the making, and within the finished work too so that the viewer can recognise aspects and unravel some of these ideas. Sometimes it is difficult to articulate why something makes us feel a certain way and I think these subtle connections are the best. And sometimes, discovering these connections can be as simple as having a go at casting wax and remembering something from your holidays. 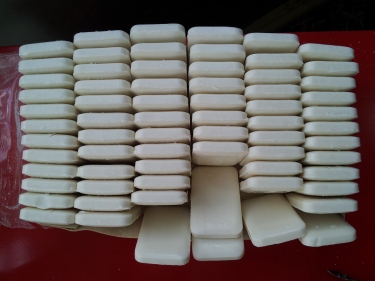 Incidentally, I read that throwing pennies into lucky wells is considered the contemporary equivalent to votive offerings. I can confirm that there is at least 25p in the well at Valle Crucis and I wonder if the people who plopped those coins there genuinely believed they were exchanging money for luck.

Find out more about the artist